This year for Thanksgiving we were able to manage work/life schedules with two other families and head to a cabin in the mountains for a Friendsgiving celebration. We chose Smithgall Woods State Park outside of Helen, Georgia because of the nice cabins and activities available in and near the park. For me, it was a wonderful mixture of relaxing alongside friends and sharing fun activities together. It was definitely a treat, and I hope we are all able to make this happen again sometime in the future.

We stayed in the Creekside Cottage at Smithgall Woods State Park just outside of Helen, GA. Creekside Cottage is one of 6 cabins at Smithgall Woods, which  range from 1 to 5 bedrooms, and can be rented out altogether for larger gatherings.
With 3 bedrooms and 3 1/2 bathrooms, Creekside Cottage provided plenty of room for all of us (6 adults and 3 kids). The spacious living area with a fireplace and large kitchen were perfect for our Thanksgiving feast. The cabin included cooking utensils, board games, and other comforts of home.
One of the most beautiful features of this particular cabin was the large back porch with views of the large stream feet away. 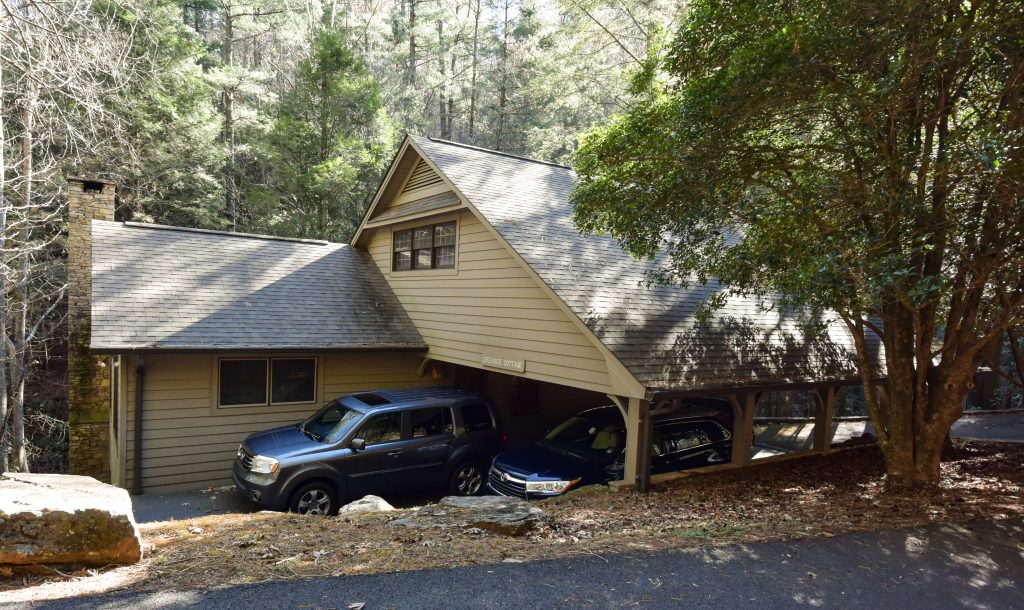 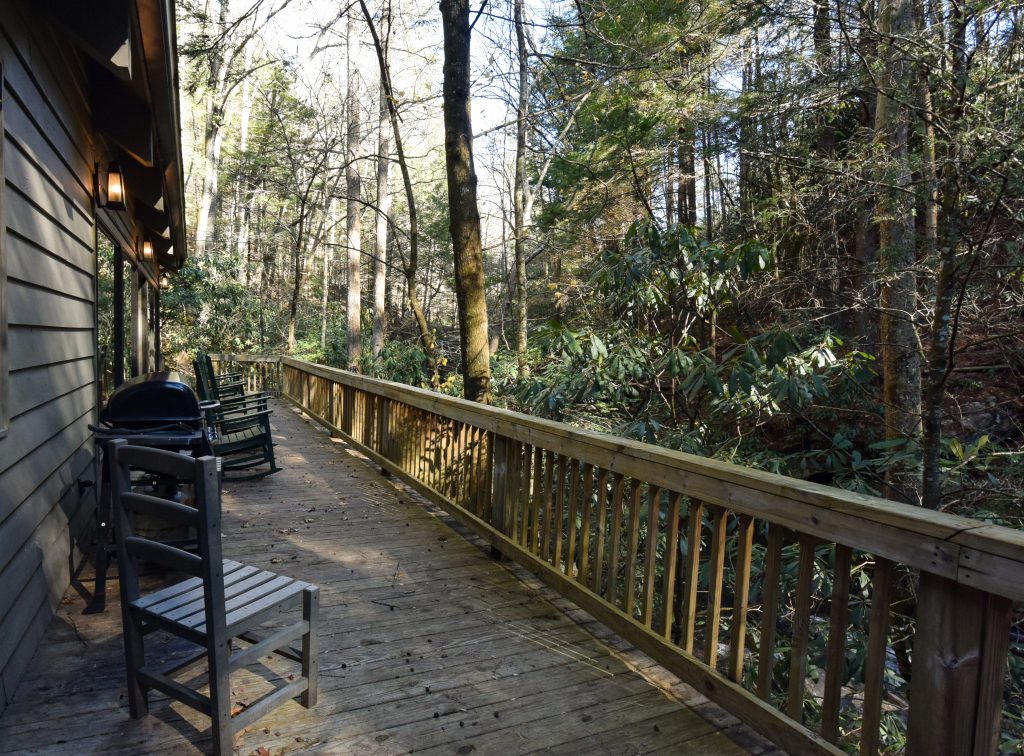 Interested in visiting Helen, GA but cabins not really your thing? Check out my other post for camping at nearby Enota Mountain Retreat. 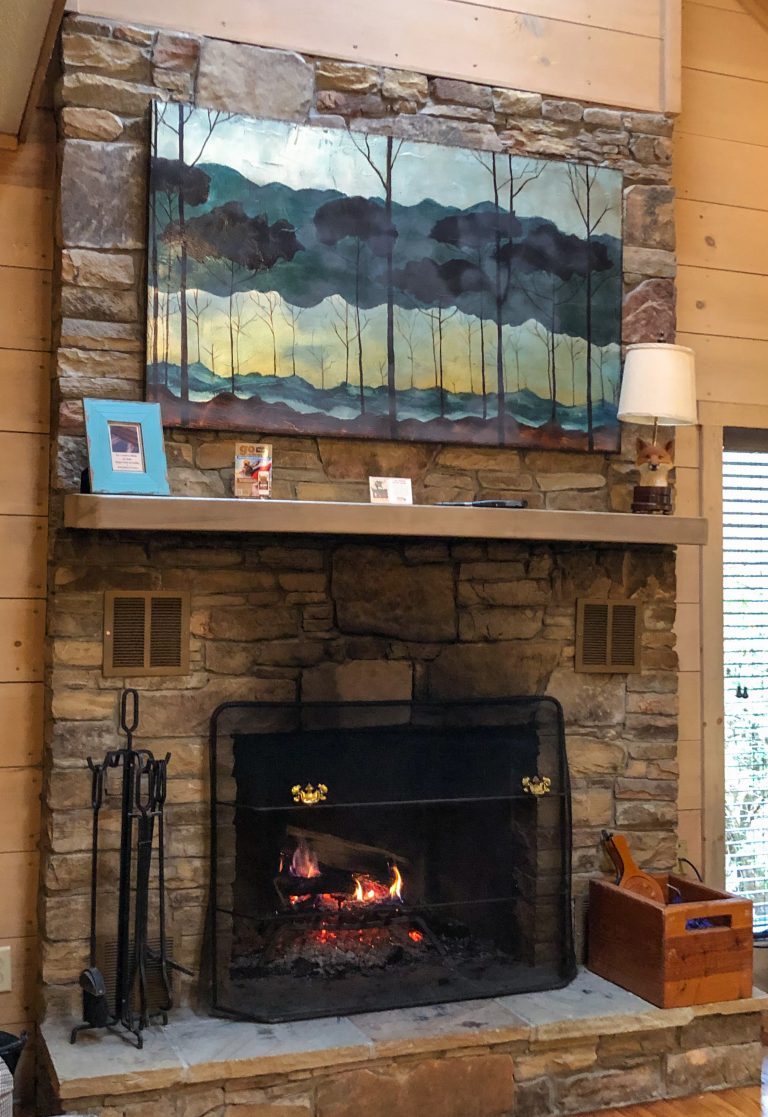 After getting off work at 6am, we grabbed a quick nap and headed to north Georgia to meet our friends at the cabin. Since we arrived later than planned, we opted to order take out pizza and hang out by the fireplace. It was a fun night filled with socializing and playing games. UNO and Chutes & Ladders became quick favorites while the kids were awake. After the kids went to bed, the night brought on a hilarious round of the card game “What Do You Meme?” and cocktails for the adults. We have accumulated quite a few expansion packs since we enjoy the game so much. Think of it as Cards Against Humanity with photos.

Disclaimer: I know this game sounds so Millennial, but as an Elder Millennial (yeah, I was born in 1981 and some people have decided we’re no longer Gen X and now we’re Millennials.. who knows/who cares… anyway) this game is actually a riot. I ask for new expansion packs every holiday. My favorites so far are the Fresh Memes 1 & 2 and the NSFW edition. The Basic Bitch pack doesn’t work as well in mixed company. A lot of the jokes fell flat with the guys. There are a few new expansions I haven’t had the chance to check out yet, such as the Stoner Expansion Pack.

For dinner we picked up pizza from Nacoochee Village Tavern & Pizzeria, our favorite spot for pizza in the Helen area!

For our first full day, we split into a couple groups and did some different activities.

The guys took the kids for the day, and they enjoyed a short hike, fishing, and games at the cabin. They even went into downtown Helen to do a little shopping.
Meanwhile, the ladies headed out on a winery tour. We were able to visit 3 wineries and have a nice lunch together. 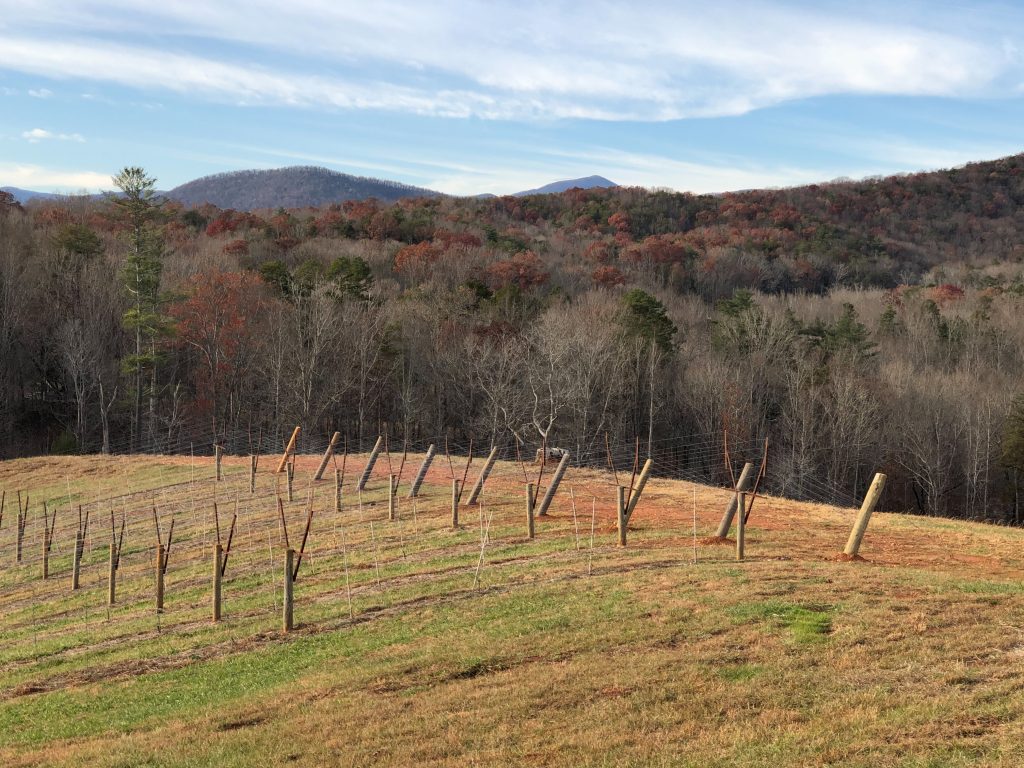 While the guys and kiddos went fishing and exploring downtown Helen, I headed out  with the ladies on a winery tour. We were able to visit 3 wineries and have a nice lunch together. For our tour we booked through VIP Southern Tours. VIP Southern Tours provided a fun and informative trip in a comfortable & clean van. Our guide provided a safe way to travel between wineries (picking us up and dropping us off at the cabin), and gave added information about Helen and the wineries in the area. Lunch and water were provided throughout our tour.

On this trip the wineries included: Serenity Cellars, CeNita Vineyards, & The Cottage Vineyard. 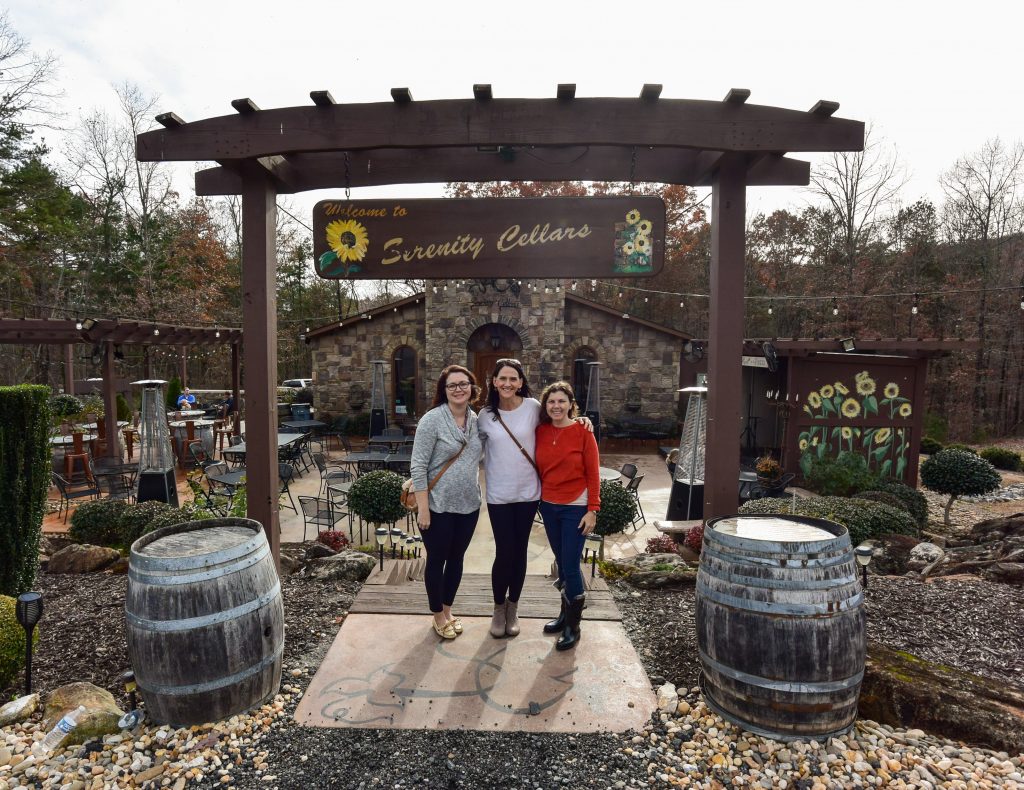 Our first stop of the day was at Serenity Cellars. If I had to pick a favorite winery of the day, Serenity Cellars would be it. The host had my weird sense of humor and all of the wines were my favorite from the day. I normally gravitate towards reds, but they had a white that I enjoyed and their take on a limoncello (Luce del Sole) came home with me! Following our tasting, we enjoyed our lunch sitting on the patio at Serenity Cellars with an extra glass of wine. 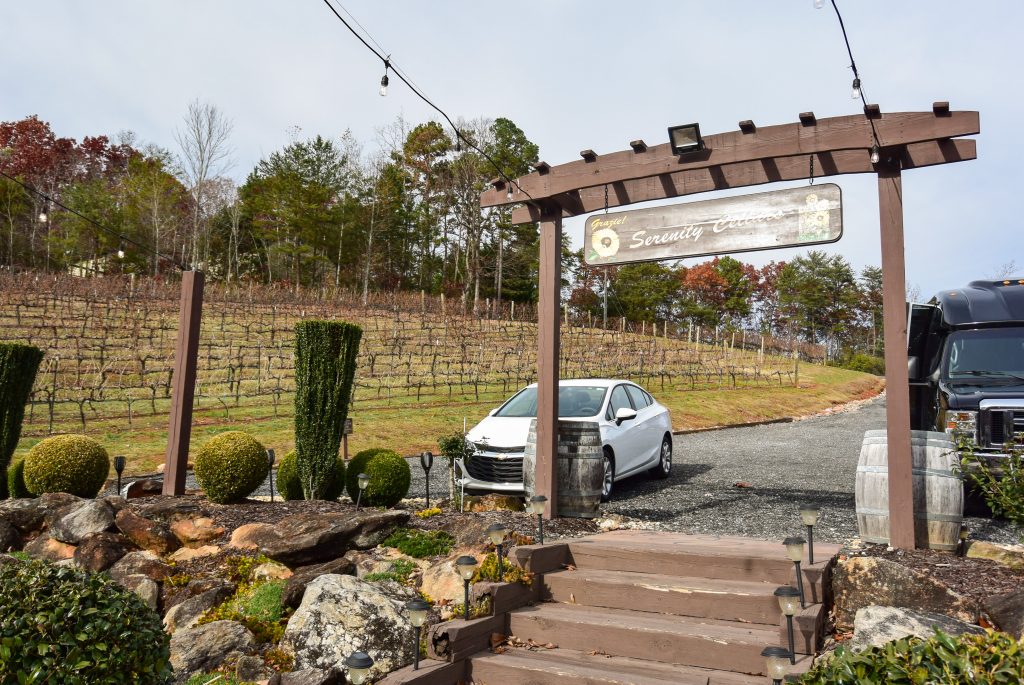 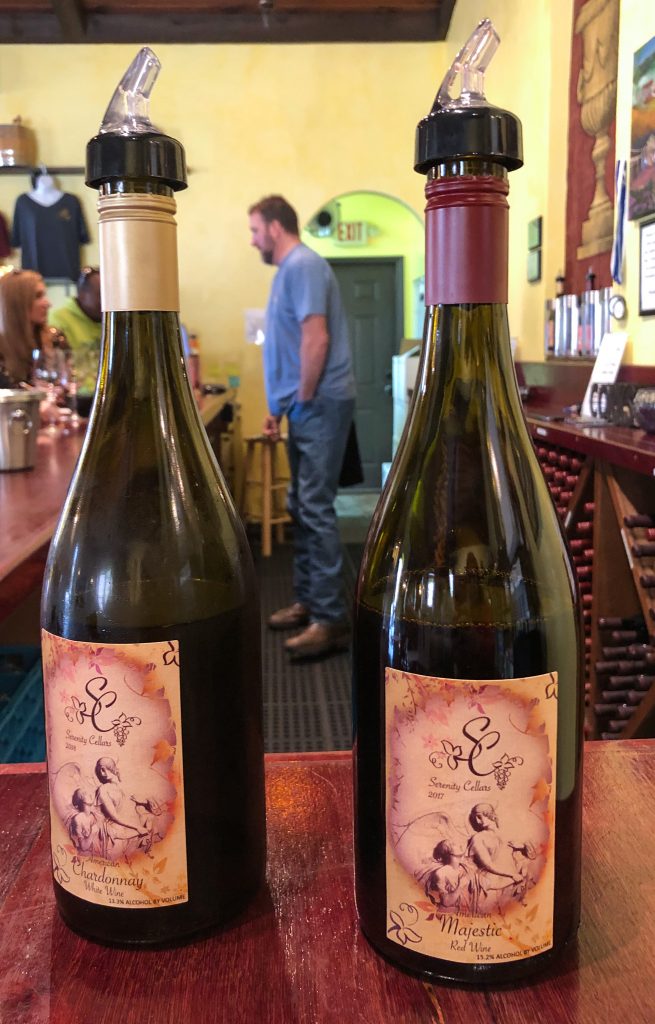 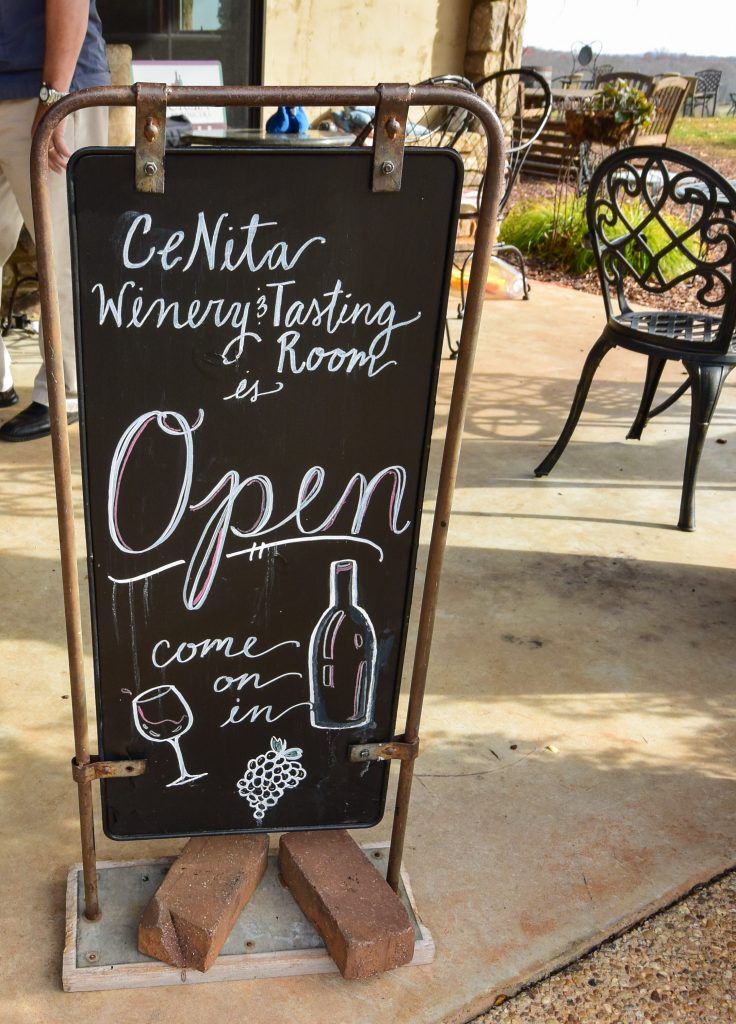 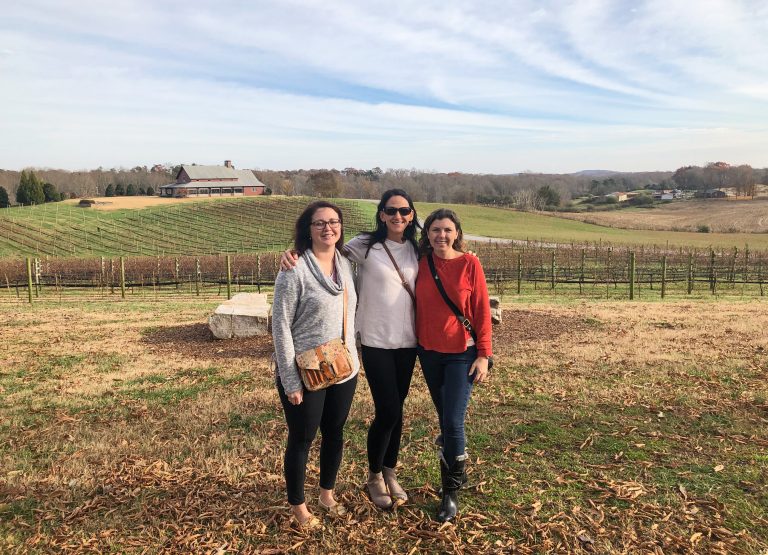 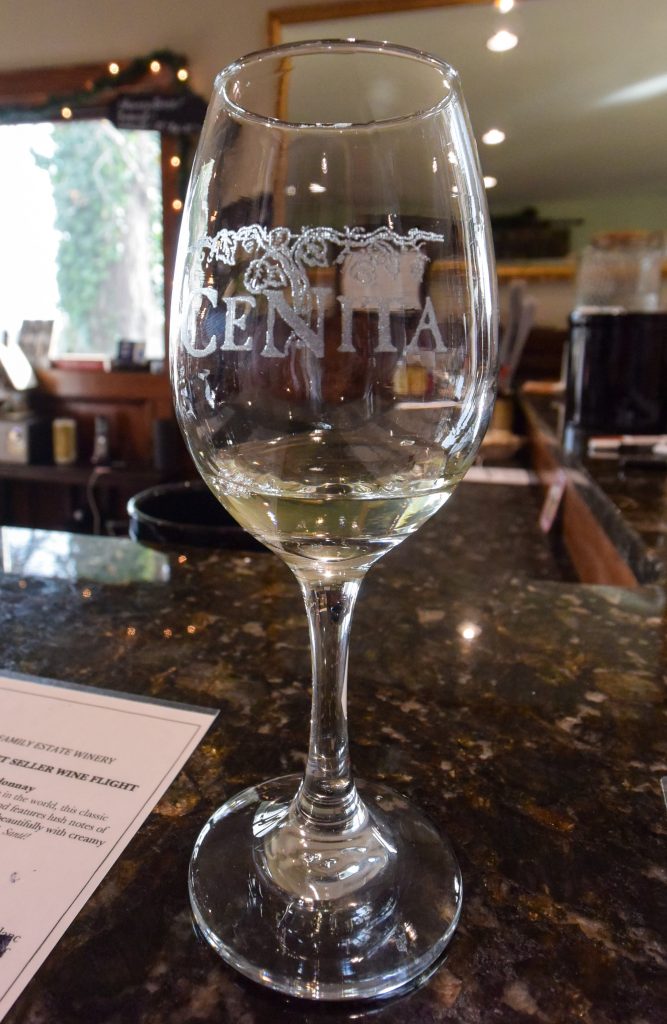 Our second stop was at CeNita Vineyards. We enjoyed some nice wine and the beautiful view of the vineyard. We even had a good laugh at their wine called “Red Headed StepChild” because one of my friends has a step-son with red hair. 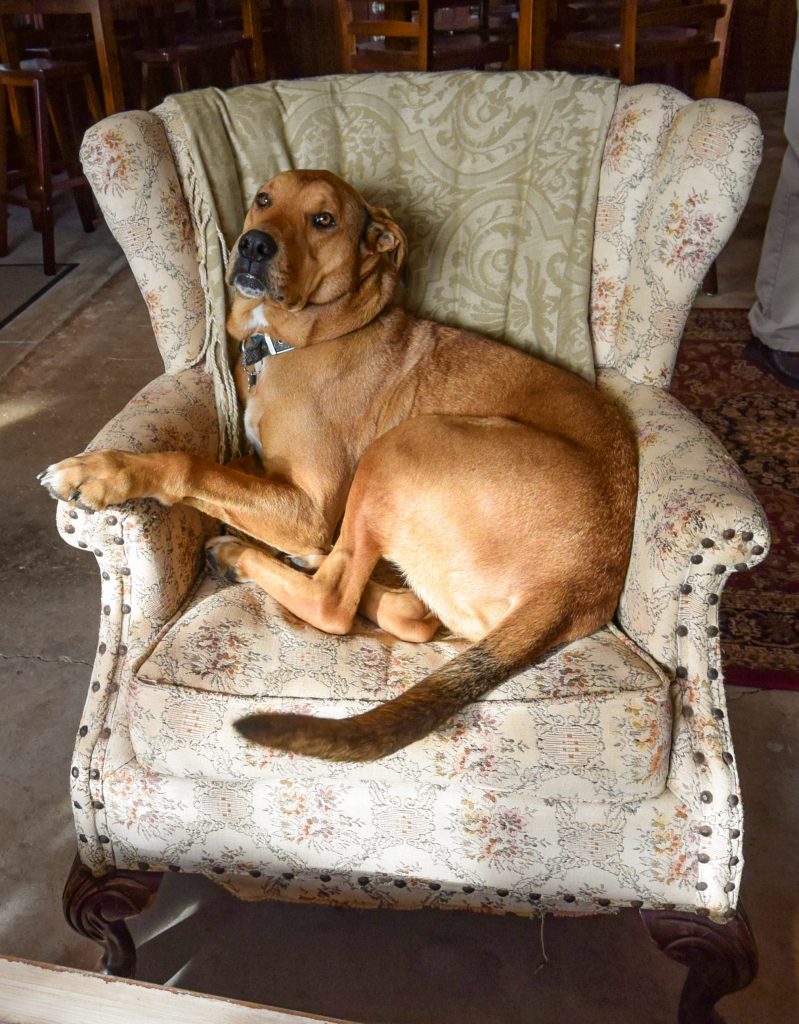 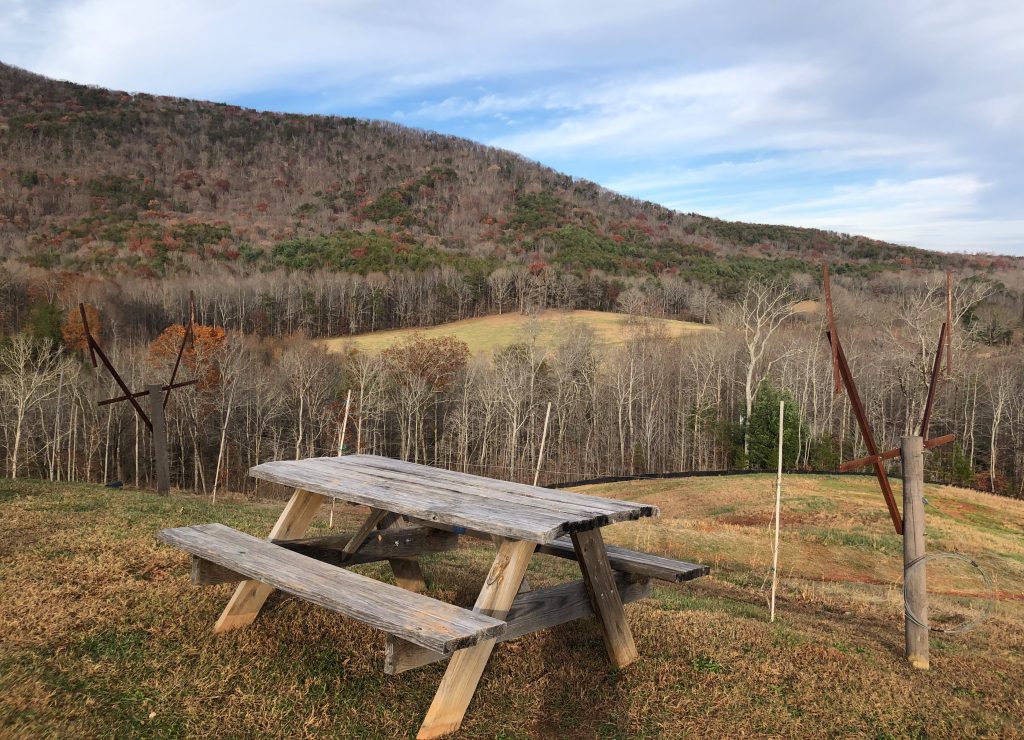 Our third and final stop on the winery tour was at the Cottage Vineyard & Winery. We enjoyed another round of wine tasting, and got to know some of the other people in our group a little better since we were sitting at large tables instead of along a bar. We were also treated to a beautiful view of the mountains outside of the tasting room.

I know the ladies at least had a very enjoyable day visiting a few wineries near Cleveland and Helen, Georgia. I would recommend VIP Southern Tours to anyone staying near Helen, Georgia looking to do a winery tour.

That evening we all got back together at the cabin. Chris prepared an awesome Mexican style dinner of tacos, margaritas, and lots of yummy sides. Apparently, I enjoyed the wine and margaritas a little too much because I have no photos of that part of the evening!

Bellies full and a fire going in the fireplace, we yet again enjoyed the company of our friends over games and drinks. 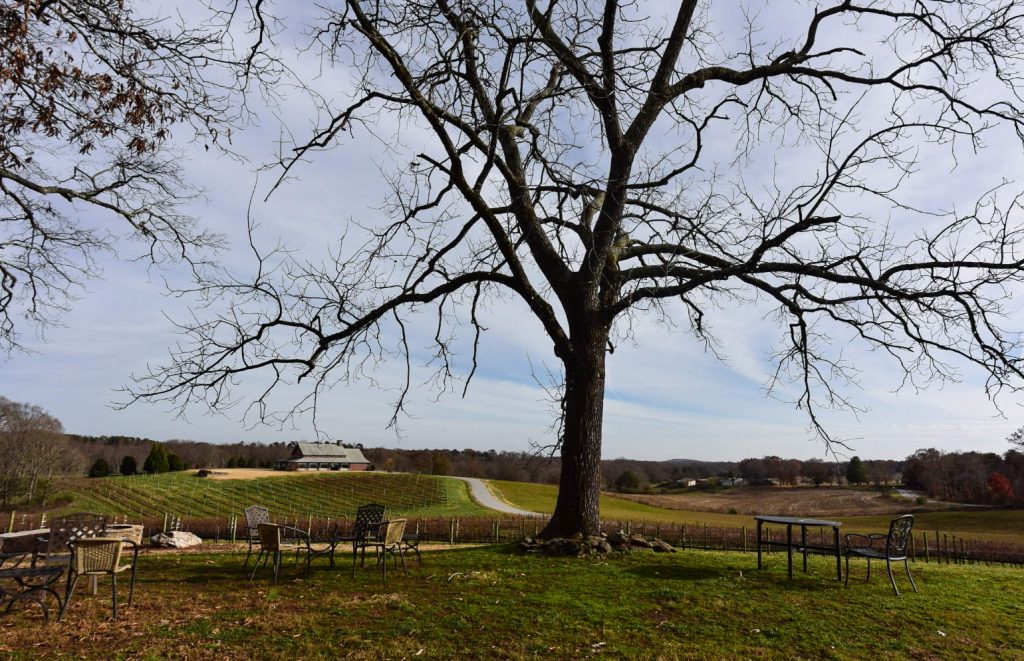 Our Friendsgiving – Thanksgiving morning started with breakfast and watching the Macy’s Thanksgiving parade. It was fun to swap stories about our family traditions around the holidays and find similarities and differences between us. 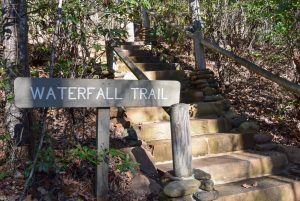 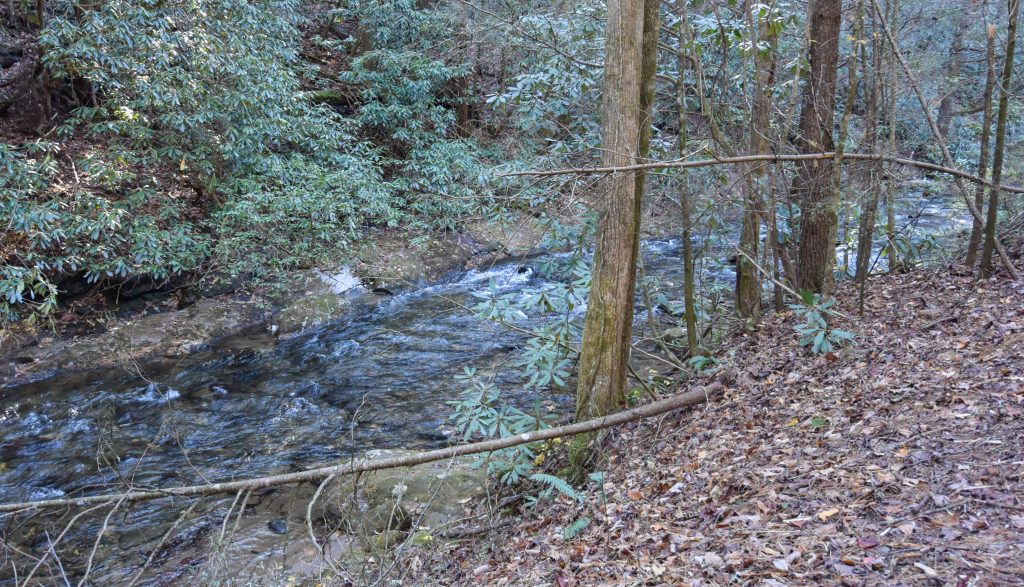 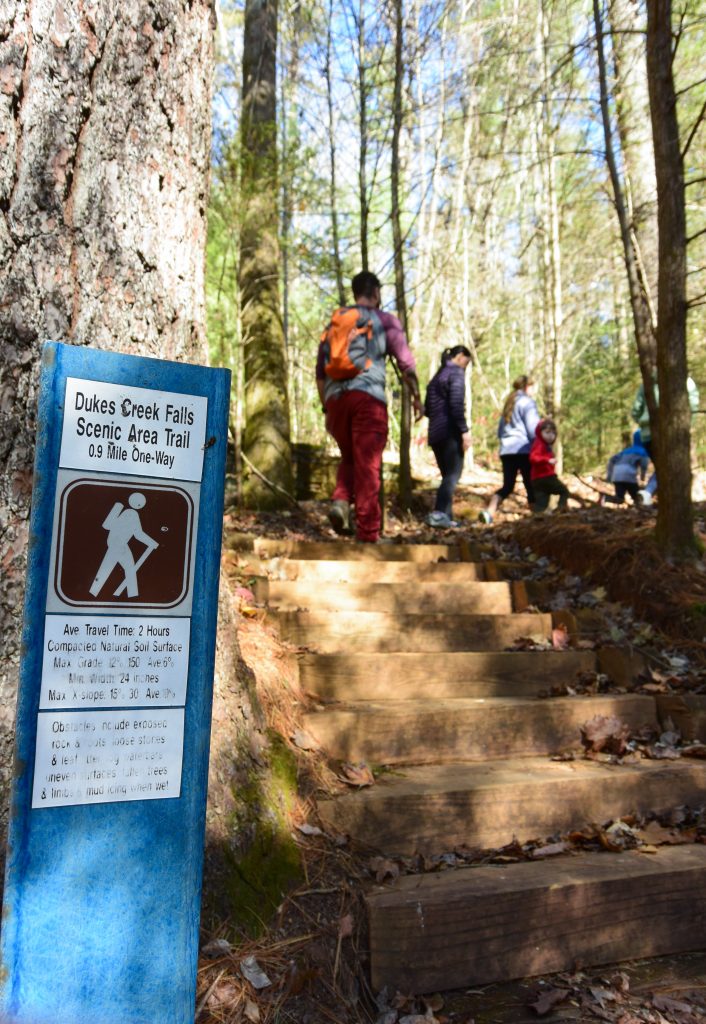 Later in the morning we decided we couldn’t pass up the opportunity to enjoy the beauty of Smithgall Woods State Park. Plus, it had turned into a beautiful day for November.

So, we headed out from the cabin for a short hike to check out Dukes Creek Falls. We took a spur trail from the cabin that joined into the regular Dukes Creek Trail (that Chris and I had taken once before) to the falls. Being able to #OptOutside was the perfect complement to our relaxing morning and dinner Feast. 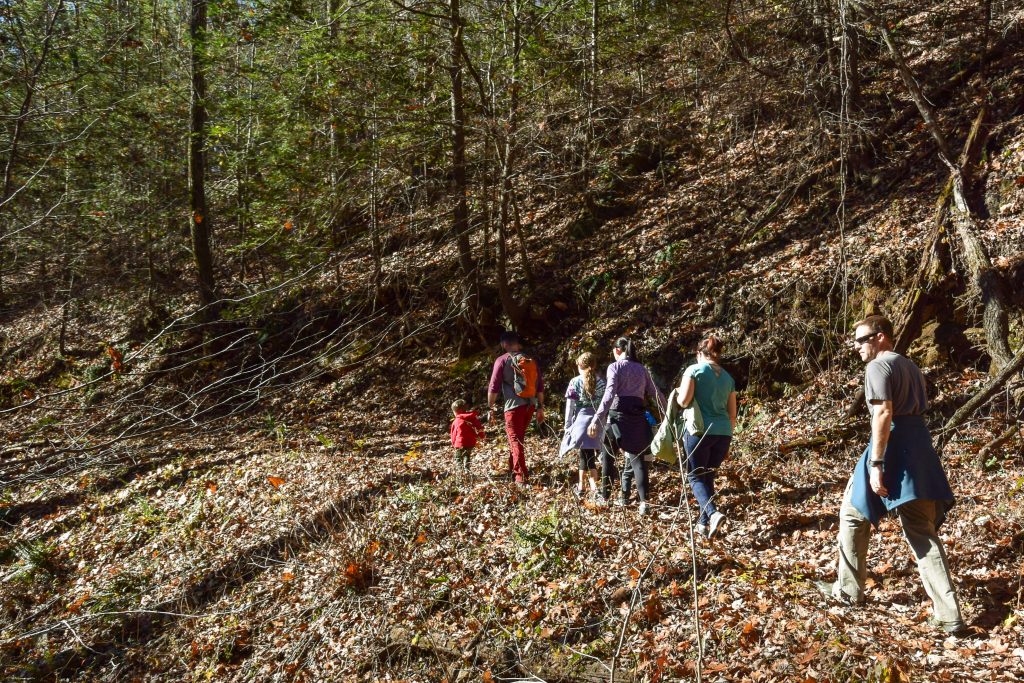 The Dukes Creek Falls Trail leads to a platform where you can actually see 2 waterfalls coming together. To your left will be the Davis Creek 150 foot waterfall, and to your right will be the multiple drops of the heavier Dukes Creek falls. 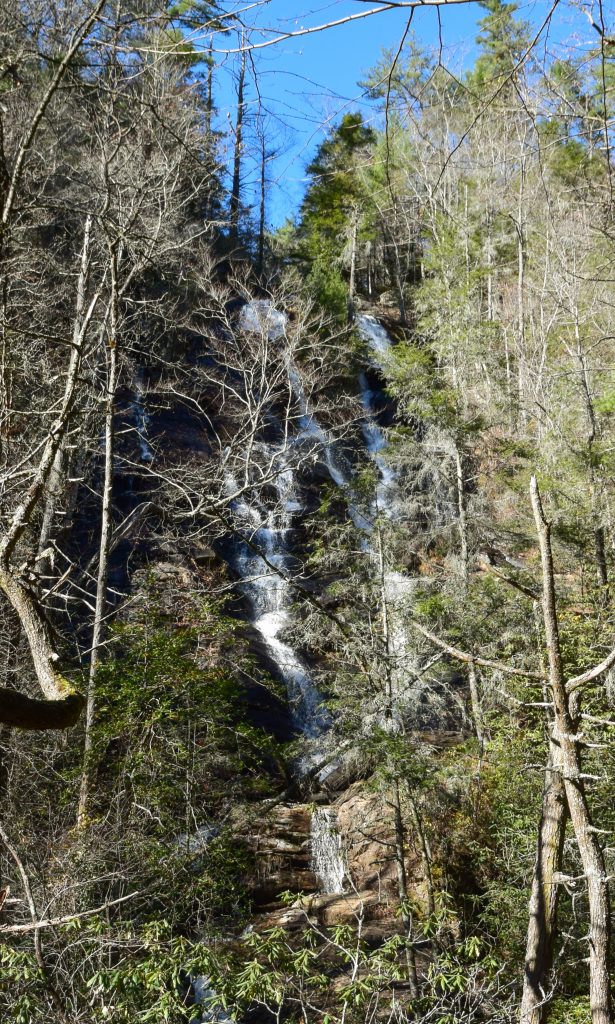 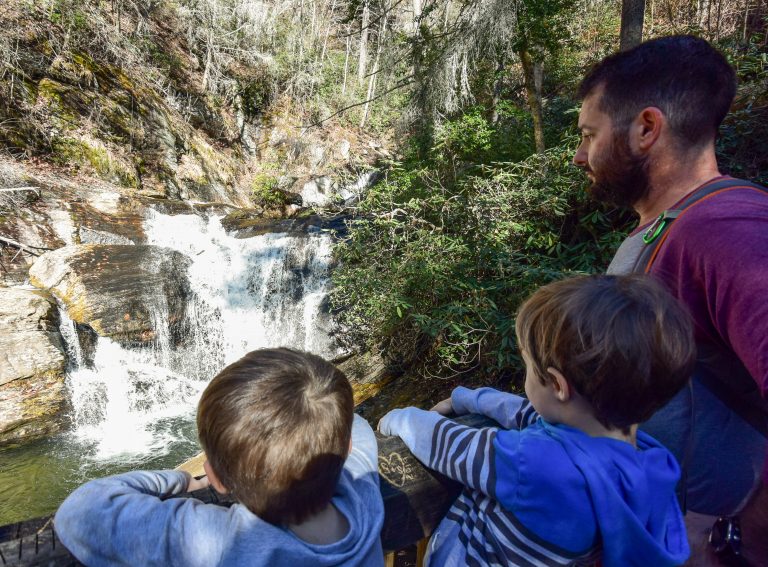 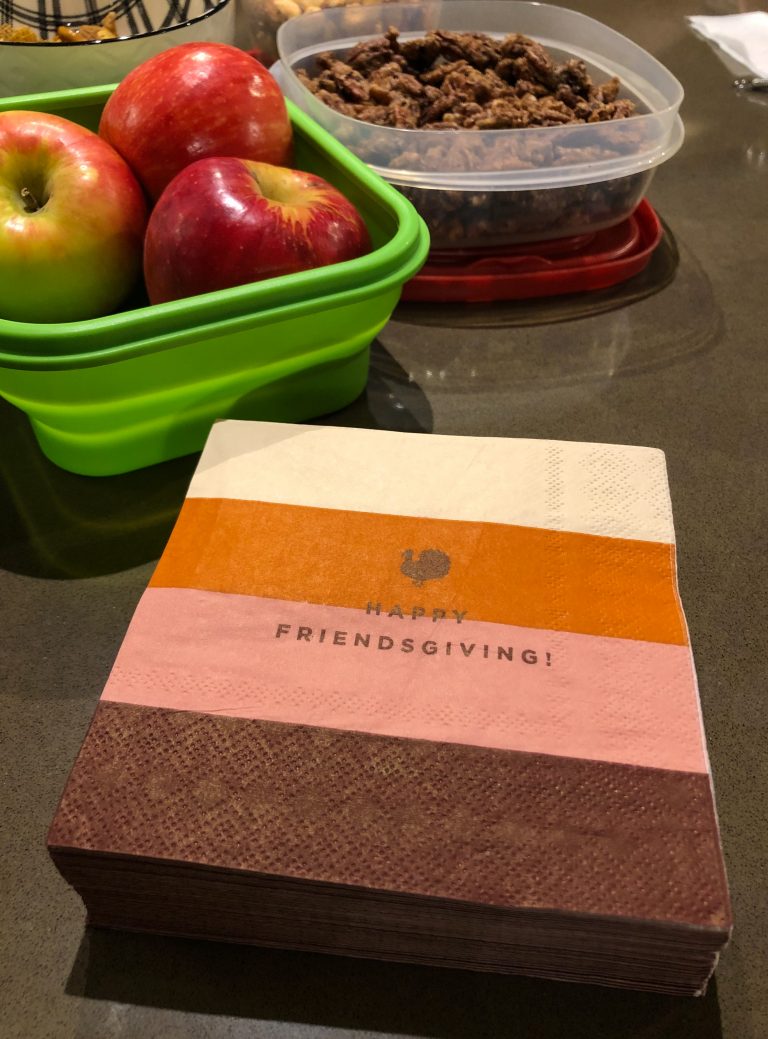 After our hike, everyone pitched in to create quite the Thanksgiving feast. Ok, we all know I didn’t cook squat, but I appreciate the amazing food everyone else brought to the table. We enjoyed a beautiful charcuterie plate and snacks, followed by tenderloin, turkey, casseroles, sprouts, and mashed potatoes. We enjoyed several yummy desserts as well. But the best part was getting to share it all with good friends and their families. 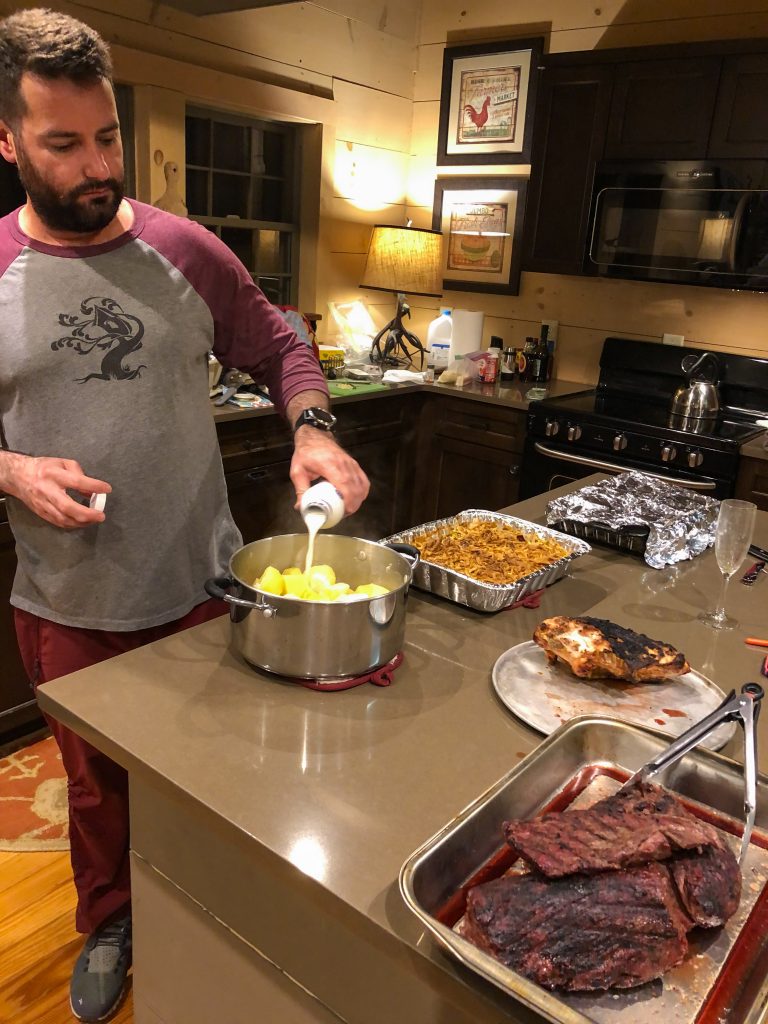 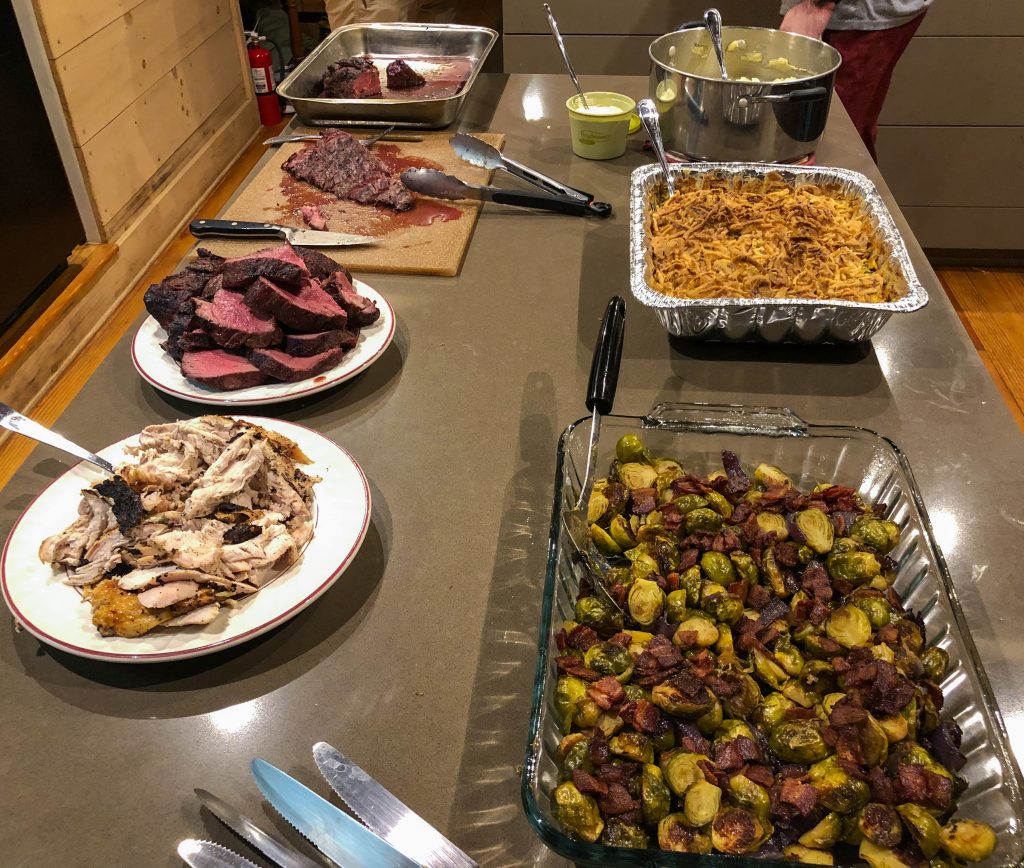 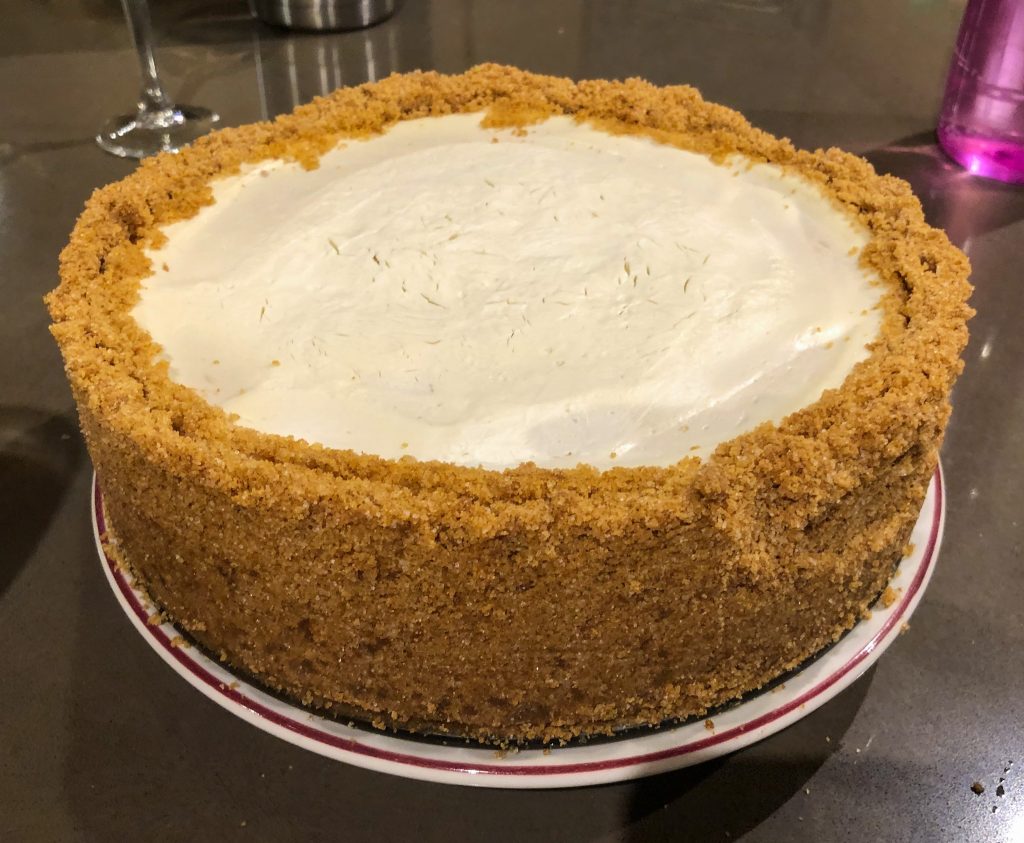 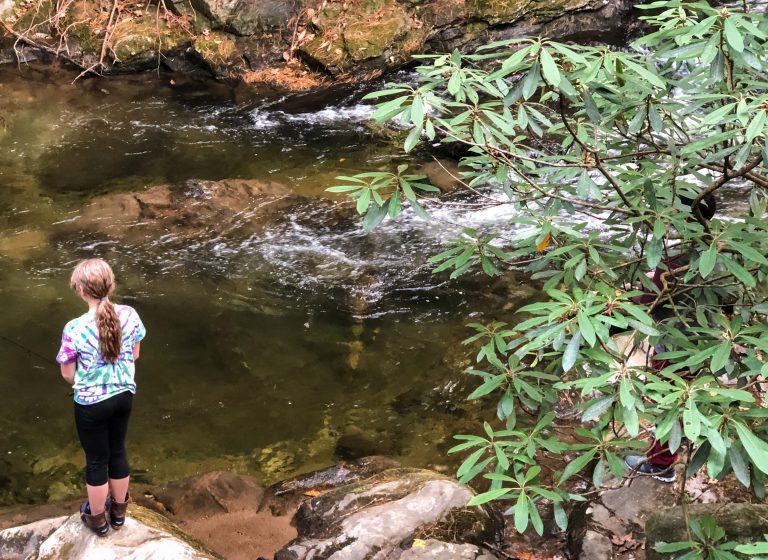 We got to enjoy one more yummy breakfast casserole before packing our bags and heading back home so everyone could get back to work/school. It was a very fun way to spend the holiday, and I hope everyone else enjoyed it as much as I did! 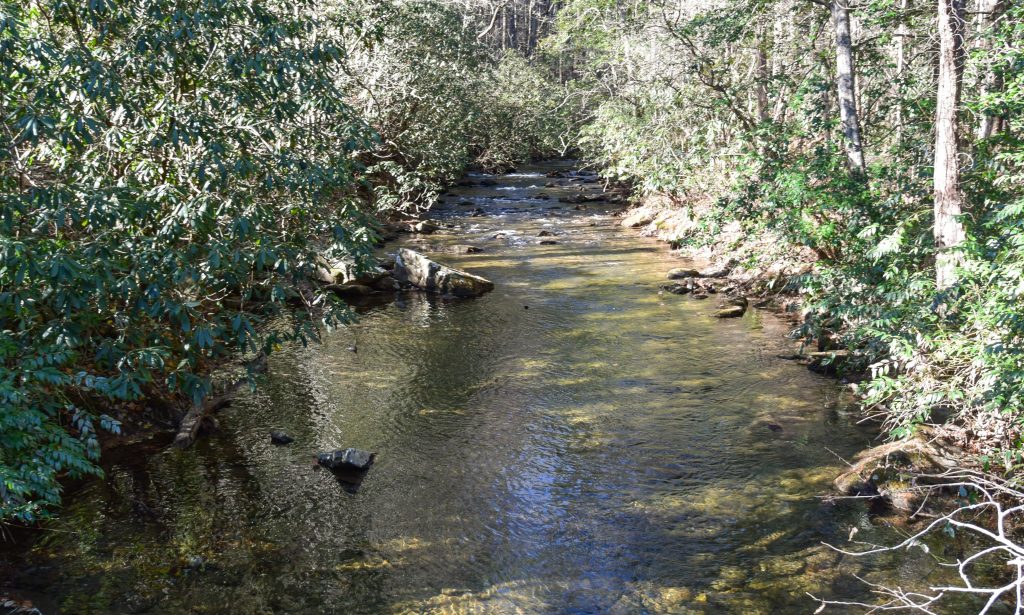 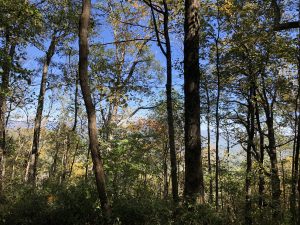 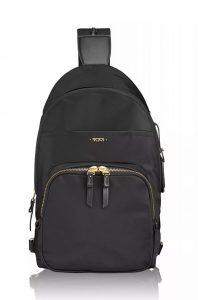